Hi folks, and welcome to Tim Meusel’s talk on Vox Pupuli’s journey as a community.

Unfortunately, Tim couldn’t make it due to a work-trip. So it’s a great honour to return to this stage, and this community, however briefly. Especially because I’m taking Tim’s place, who’s done so much for us here.

You may already know me from such places as THE INTERNET. I’ve been involved with open source for quite some time now, about as long as I’ve been working in Ops, or more accurately, with Infrastructure.

or, if you wanna be more specific, genderqueer, and bisexual, which I try to mention at every stage I am given, simply to represent.

genders are like shoes. if they don't fit well, it looks a bit weird, and feels uncomfortable.

but enough about me, let’s talk about

It has come to my attention that there seems to be an issue with how Vox Pupuli is pronounced! Let’s start with the basics: Vox Pupuli is a play on the Latin phrase “Vox Populus” (the voice of the people) — where pupuli means puppets. So it’s the voice of little puppets!

Here are two audio samples, and their respective IPA:

To begin with, we are a Collaborative community of Puppet practitioners. I’ve stolen this declaration from sous-chefs, which is a Collaborative community of Chef practitioners. So the good news is: We’re not alone in what we do, and how we do that. And what we do, is we maintain a lot of puppet modules. Currently we have 89 modules published on the forge. And about ~95 in our GitHub organisation, which are being polished up, so they too can be published.

The sheer amount of modules and repositories leads to some challenges, which we will discuss today.

One way to tackle that is to be available 24/7 on IRC (and slack) to help you. It’s our form of Chat-Ops! It’s very important to be present, and responsive. But we also try very hard to be polite, while being helpful!

By opening our minds to new technologies, and our hearts to new people

that is… we give people really easy access to our repositories. This certainly encourages them to pick up our slack ;) but more on that later…

We also encourage users to contribute: If we cannot solve their problems, maybe we can help them fix it themself.

And as rtyler can most certainly confirm, maintaining a module on your own can be an overwhelming experience. But it’s also a crushing experience for someone to find your module, and notice afterwards that it’s unmaintained.

There’s a broader issue: For each maintainer, we have ~10 (prospective) contributors. People who will contribute a code or docs fix, or open issues, or help out with code-review. And then we have around ~100 users, who are passive and silent.

They might find the barrier to opening an issue harder to surpass, than forking a module internally, or finding a different one, or writing their own. The reasons might be technical, organizational, or language issues. But the reason doesn’t matter.

We want to provide a home for orphaned modules, to prevent this kind of churn. And we keep maintainers from burning out, by providing a whole collective of module developers.

Because developing alone sucks. And there is such hard pressure on a single person, if your module is popular. Sometimes you just want to go on vacation. Or you switch jobs, and your new company is all about Ansible. But you also might lose interest in development altogether, and finally start that alpaca farm you’ve been dreaming about. Wherever life caries you, your module has become infrastructure, and we help maintain that infrastructure.

We are currently 113 people with merge permissions:

Just five people work for Puppet Inc, most of our contributors participate in their free time. Or rather, they’re normal administrators that have to deal with puppet at work.

We have many contributors who are new to git and github. Rebasing a feature branch against upstream master is difficult, if you’ve never done it.

Many have never written tests, and dealing with rspec/rubocop/beaker is hard as well. We don’t have to teach them writing good puppet code, but all the related tooling.

Many administrators of legacy infrastructures with (Puppet3, Ruby191, Ruby2.0), so we spend a lot of time why we should move on. Please remember that Puppet2.7 was declared EOL in November 2016. Extended Support for 2014 ended in 2014 Can we call Puppet4 legacy already? (bastelfreak: yes pls)

These days, common support cases are:

There are three key motivations to why Vox Pupuli was formed, and we’ve alluded already to most of them:

idea: @PrettierCode for Ruby, with a style that people actually write

As the amount of modules grew, we needed a way to manage this. We decided that our best approach would be to adopt modulesync, which at that time was developed by Morgan Haskell of Puppet, but eventually moved to us, as she grew tired of it ;)

Keeping generic files like Gemfile/Rakefile in sync is pain, if done by hand, and modulesync saves us sooo much time. It takes a config file + templates, throws it into every module’s git repo It Works with GitHub Pull Requests, so in theory everybody can start it, and every of our Collaborators can approve/merge it.

However, it’s not very easy to use, and we’re looking for ways to make it more comfortable… or a replacement for it.

Travis is a free CI platform. Puppet Inc. sponsors us unlimited(?) concurrent travis slots (Thanks to 💜David Schmitt💜), which we really need given all the rpsec-puppet tests we test on all common Puppet×Ruby versions. These days Travis also runs beaker acceptance tests for us.

And, finally, it handles the release process of modules to the Forge:

For our release process we use a gem called voxpupuli-release. It’s essentially a wrapper around puppet-blacksmith, and provides rake task to bump + tag a module — after doing the appropriate sanity checks.

The push to the Forge is handled in a deploy task on Travis. So, in theory everybody can start it, each collaborator can approve it. They do have to tag && push --tags however, so Travis can react to it. What’s still missing is to also create a github release.

Here’s all (most? some??) of our auxiliary tooling summarized:

Let’s talk docs! Our own docs look a little bit lacking for love, but they do contain everything you need to know to get started, or transfer a module, and, as of recently a Review Guidline (I’ll get back to this in a bit)

On the other hand, we have automatically (💜puppet-strings💜) generated html docs for a bunch of modules:

Which are automagically published under our domain.

We elected a second Project Management Committee in 2017! The PMC enforces CoC, and has lately tasked itself to bring bring Vox Pupuli into the Software Freedom Conservancy.

The current members are

Our PMC guidelines are created by the community https://tinyurl.com/voxpupuli-governance-md and given the latest election turnout, we might have to consider amending them…

So let’s look at some

People are often too scared to contribute. They might think they can’t write the code needed, but they can! So encourage them!

Travis cheats: closing/reopen a PR will trigger another Travis run. A project admin can do this in the travis UI, but outside-contributors can’t. close/reopen can be triggered by the PR author, however.

We try to get at least a unit test for all new features.

On a bugfix we’re really happy when someone includes a test that fails without the patch, but works with it.

And always, always say thanks! Be friendly to contributors. We’re always happy for a new Issue/PR (We prefer PRs;)

Everybody is good at blaming others, but we rarely tell people that they did something well. bastelfreak is happy about all new Datatypes!

People often don’t notice that a Travis run has failed. Do we need to change the visibility?

For a clean history we want people to use a correct email address.

Something that many people very often forget: Is the new feature documented in the README.md?

Often people ask us to migrate a dead module into our namespace. All we can do is head out to the maintainer to ask for that, and hope for the best. 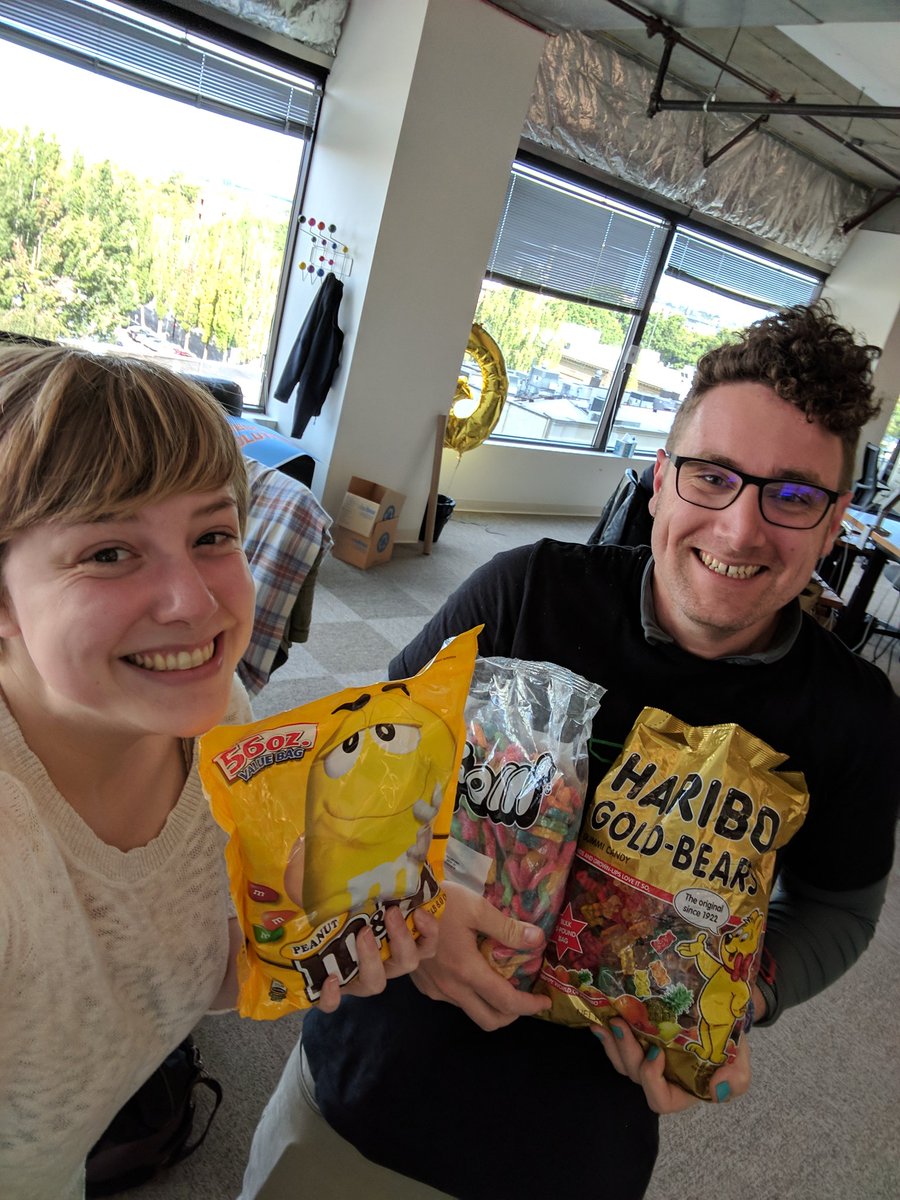 bastelfreak noticed in the Archlinux community that people are happy, if you send them sweets

We tried this in the Puppet community as well. Puppet Inc. received 15pounds of sweets for all their encouragement for the community.

You all keep contributing and bastelfreak will send you sweets as well! 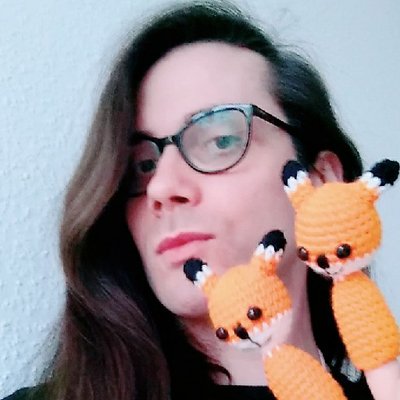 Now, my methods are slightly different: Instead of handy, I like to hand out these very cute puppets to anyone who wants one. So long as you promise to send back cute selfies!

What if I told you that a lot of this daily business could be automated?

There are a lot of tools out there — and Danger is only one of them, that could help our contributors cut down on the “boilerplate” responses, and instead have a robot do that.

This would leave us humans with more time to take selfies and eat candy.

Inexplicably, every time a popular module is broken, people will join the Vox Pupuli IRC channel to ask for help, fixes or workarounds.

This happend twice for stdlib (we didn’t break it, we just noticed it)

People are scared to make releases because it could break things. Release as often as possible. Less changes per release → less broken releases.

‘Version numbers are cheap - use them’ - Igor Galić

People are often scared to merge breaking changes. Merging them is totally okay if you do proper versioning. We don’t delete broken releases and try to fix it, we just do a new release!

‘DevOps is all about empathy’ - Rob Nelson

Working closely together, listening to users, always be constructive, don’t blame others for mistakes. we all break stuff from time to time.

Thank you for your attention💜